As a professional developer, I spend a lot of time with my hands on a keyboard.

Many many years ago, I was privileged to use an IBM Model M keyboard.  I really enjoyed it, but trends changed.  Microsoft came out with a fancy looking ergonomic keyboard and I had the chance to try it out.  I liked the shape, but the keys – especially the space bar – were rather unpleasant.  So, I went back to the Model M.  I even managed to pick up a “space saver” TKL (“ten key” less) version, which is designed more for server racks 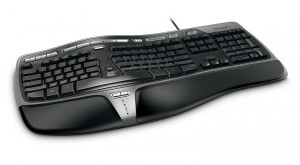 Over time, though, I just used whatever was attached.  My jobs at the time just had a bundled Compaq or Dell keyboard and I just used it.  Unless they keyboard was really terrible, I managed and didn’t make a fuss.  When I started working for myself, I tried out a Microsoft Natural Ergonomic 4000.  They had come a LONG way since the first one, the key feel was much better.

After a little while, I switched to a Mac.  The Apple keyboards are actually pretty good, better than most, but they just don’t have much key travel, this is the nature of their low-profile design.  I plugged in my Microsoft Ergonomic again.  I decided I liked it enough to even get a second one after the first one wore out. 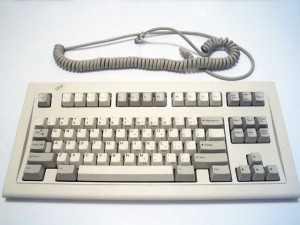 All of this time, I still had my Model M.  It stayed with me through about 5 moves, stuck in a closet, still has the exceptionally long PS/2 cable (still coiled up, it’s probably 10′ long).  It’s heavy, it’s fairly loud.  It uses “buckling springs” under the keys that gives a unique progressive resistance and feedback.

I never had any problems with my hands and wrists with this keyboard.  I figured it must give your hands enough strength to keep healthy, or something like that.  But, it was PS/2.  So it limited my opportunities to use it.

I started wondering if I could get a better keyboard, a mechanical keyboard rather than a membrane keyboard.  This is the only way to get really good feedback from each key.  Unfortunately, cheap keyboards are so popular because they’re, you know, cheap.  A good keyboard starts to cost something.  I thought about it though, and realized I would pay a fair bit for a really good mouse but for some reason always cheaped out on a keyboard that I use much more… so… I set myself a slightly higher budget and started to search.

It seems like most of the focus these days for these higher-end keyboards is on gamers.  One main feature is called n-key rollover, so you can hit a whole bunch of keys and have them all register.  (Here’s a test to try your own keyboard: hold down both shift keys and try to type “the quick brown fox jumps over the lazy dog”.  Yes, this is challenging.  If you don’t have a similar feature, you may be dismayed to see many letters missing).

There are a number of flavours of key switches, mostly from the Cherry company, they are identified by a color, such as black, blue, red, etc.  It’s very hard to know what kind you want, because very rarely are these keyboards available to try in stores!  I managed to find one or two, and gave it the swat test, and did not like it at all.  (It seems like the one I tried were the blue variety).

Other features are cool, but not that necessary for work, like LED backlighting.  I didn’t need to see this feature, though it would be cool. 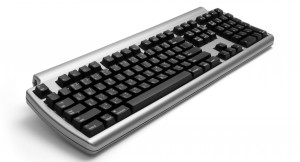 I finally found in a review a reference to the Matias tactile keyboards.  I checked them out and it sounded really good.  I wasn’t worried too much about the volume, though I heard the Tactile Pro described as “antisocially loud”.  They also made one called the Quiet Pro, though, and I thought that only offered advantages over the non-quiet version.  They had a Mac version!  If the caption didn’t give it away, I got it, and I’m using it right now.  It’s really really good!  It’s really easy to get used to typing on one of these, so that when you go back to a cheap keyboard it feels jarringly wrong.

At the same time, though, I found a wonderful project online called something like TMK which is an open source driver/converter for older keyboards.  With Teensy (or a few flavours of Arduino) you can convert a PS/2 keyboard to USB and add a ton of really cool features to it at the same time.

What this means is… I realized my Model M can come back to life!  I have most of the parts and at least one more on order, but I will build this very soon.  I will report when I get it running.  I will have my choice of great mechanical keyboards, well, at my fingertips.

Nextcloud via Proxy on unRAID

The above are two of my favorite software packages at the moment.  So powerful and I’m very content to run it on my own hardware, in house!  In order to get it to work though, Read more…

Cloud drives are everywhere. OneDrive, Google, Dropbox, Amazon, Box, and a dozen others I haven’t remembered.  You can create your own with OwnCloud or even just WebDAV if you need. But the problem with having Read more…

The visible and eminently tactile part of the Steam hardware experience is the controller. Steam took a leap and designed something significantly different from the standard twin stick/d-pad “standard”. The fundamental reason for doing this Read more…