I came to the realization a few years ago that the eBook reader Marvin was hands down, the best ePub reader for me.  Very flexible, configurable and some (still) unique features made it well worth the price.

That was, as I mentioned, a few years ago and I started to get a little frustrated with a few important (to me) missing features, such as ePub 3 features like aside (pop-up footnote) support, syncing and a few other small things.  The lack of these was one thing that bothered me.  The fact that the same developer released a second, free ePub reader app that offered these features was even worse, and quite frustrating to those that paid for the original app.

It wasn’t simply an easy task to switch from Marvin to Gerty though.  It wasn’t designed as a generic ePub reader, but rather a sort of book-journaling app.  What was the developer thinking?

It turns out he was thinking.  And working hard.  He was rewriting Marvin from scratch.  Today, he released Marvin 3.  This release adds, and far surpasses my original wish list.  Now there is full iOS9 support, including document picker, spotlight integration and split-screen support.  The icing on the latter part of that particular cake is that there is a second, nearly identical app, called Marvin SxS (“Side by Side”) that lets you have two copies of Marvin installed on the same device and you can have two ePubs open at the same time in devices that support split screen. 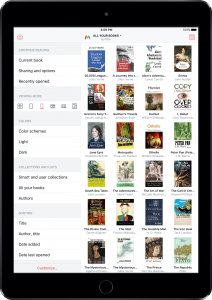 Marvin on an iPad

There are lots of great built-in fonts, whether you are a sans or a serif fan.  There is also OpenDyslexic built in.  If you aren’t satisfied with any of the bundled (and system) fonts, you can sideload others.

Margin size, line spacing, paragraph spacing, indent size are all configurable.  There are themes.  Multiple columns available in both landscape and portrait.  Textshots and auto-bookmarking on close.  Reading location syncs automatically to iCloud (zero-config).  And then there’s annotations – all those things that were in Gerty are now in Marvin 3.  You can of course highlight with a load of colors, but also add notes and photos to a book.   Apparently there are multiple map-viewing modes (you can read maps in here?)

There is native comic book (CBR and CBZ) support, and it’s really, really good.  I have, and love, Chunky Comic Reader, but in practice, there are only a few significant advantages Marvin 3 lacks – PDF comics, landscape for dual-pages and ComicStreamer support.  The page thumbnails (with long-tap to preview the page) are wonderful.  The zig-zag mode is much like Chunky’s “pan” mode.  You can scrub through the comic and have page previews show you where you are.  Given that Chunky is iPad only, I might find myself using Marvin for some of my comic reading, depending on the amount of dual-pages I might expect.

I have only touched the surface.  The only other reader that comes close regarding configurability is Moon+ Reader Pro on Android.

It is not a free upgrade.  There are two in-app-purchases to unlock full screen use and color themes, $3.99 USD for the former and a variety of “tips” for the latter, although you only get certain themes depending on the amount you “tip”. Kinda sounds to me like a purchase and not a tip… The SxS version is a full purchase without IAP unlocks – other than the themes.  To me, the regular IAP (or outright purchase) is well worth the cost.  The colours, not so much, but that is merely an opinion.

The bottom line is, if you’re looking for the best ePub reader, get Marvin 3.

I’ve been a huge fan of 1Password since the beginning. I bought several versions and upgrades for multiple machines and never regretted it. Something happened with version 7 though, and I haven’t been as happy Read more…